The Parties to the Montreal Protocol met in Austria on 11-14 July for the 40th Meeting of the Open-ended Working Group (OEWG 40) to discuss implementation of the Kigali Amendment.

International standards and the urgent need for their revision to allow wider use of low-GWP energy efficient alternatives is high on the agenda of the governments that have agreed to gradually phase down HFCs globally.

In a side event titled “Smarter Standards: Vital for Kigali Amendment Success”, shecco, represented by Klara Skacanova, Market Development Manager, gave a presentation about the LIFE FRONT project, its objectives and preliminary findings of the industry survey conducted within the project.

Daniel Colbourne, representing HEAT also participated in the side event, where he highlighted the challenges in the standardisation process especially applicable to A3 refrigerants. He noted that the lengthy process is an important barrier to the fast-moving HVAC&R industry that is constantly innovating and bringing new HFC-free technologies to the market. 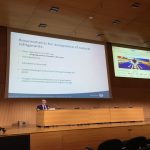 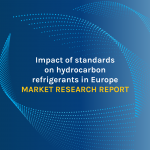